Moving beyond the simulation and into the real world, the DIY Autonomous Vehicle Project section  describes the implementation of the FormulaPi lane tracking algorithms on an Elegoo vehicle with a RaspberryPi 3, Arduino Uno, and RaspberryPi camera.

To simulate the Yetiborg vehicle from PiBorg, we used the Clearpath Robotics Husky vehicle model. Clearpath Robotics is a hardware and software manufacturer that provides unmanned vehicles, systems and solutions to industry leaders in over 35 countries around the world. They heavily support the open-source community and integrate ROS into the design of their robotic platforms.

The Husky platform most closely resembles the PiBorg Yetiborg robot. The Husky was developed to be an outdoor ready unmanned ground vehicle used for research and rapid prototyping. Husky fully supports ROS—all of the packages are available in the Husky github org. This section will describe the process of installing and operating the Husky robot in Gazebo. Then, the parameters of Husky model will be modified to more closely resemble the YetiBorg dimensions. Finally, the YetiBorg model will be incorporated into the FormulaPi track world, resulting in a complete simulation environment.

The first step is to download the base Husky packages from the Husky Github repository. This includes the following ROS packages used for simulation as well as operation of the real Husky robot.

Next, download the Husky Gazebo package from the Husky Simulator repository on Github.

Lastly, download the Husky Rviz package from the Husky Desktop repository on Github.

Since these packages are installed from source, they need to be installed in the catkin folder. They can be built with the following command:

Next, test the joystick control by running the following commands in separate windows.

The robot can be maneuvered using the joystick to change its direction. The user can alternate between two speeds by holding either the “A” or “B” buttons on an Xbox controller.

Finally, test the path planning with a basic move_base setup but no mapping or localization. Run these commands in separate windows.

In Rviz, ensure the Fixed Frame parameter is set to “odom” and the visualizers in the Navigation group are enabled. You can use the 2D Nav Goal tool in the top toolbar to select a movement goal in the visualizer. The Husky robot should automatically navigate to the goal position and orientation. An example of the Rviz and Gazebo visualizations is shown below. The green arrow depicts the goal, the yellow lines represent the LIDAR output, and the blue line behind the Husky represents the previously navigated path. 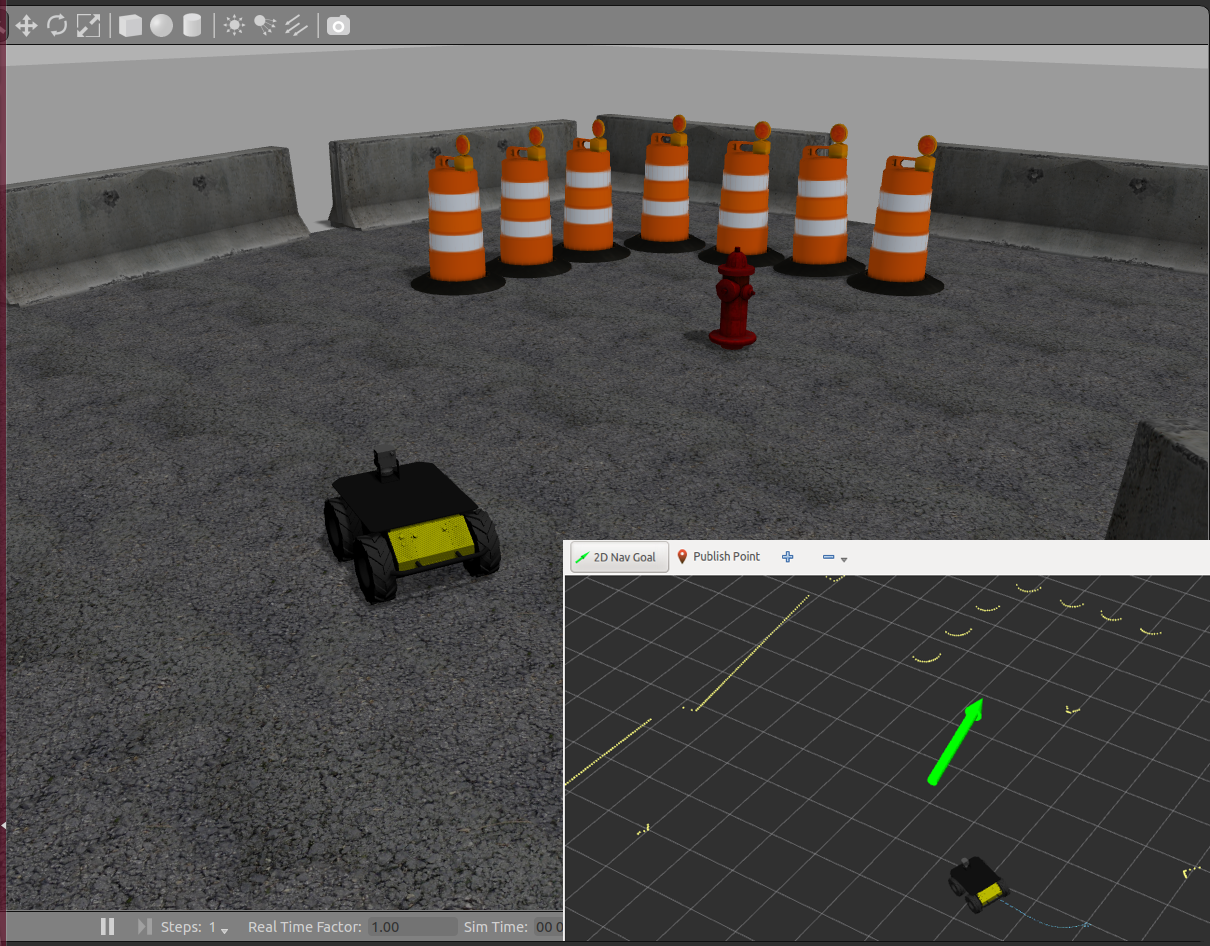 After the Husky model is successfully running and integrated with ROS and Gazebo, we need to modify the model parameters to more closely resemble the Yetiborg robot. A list of some of the default environmental variables can be found here. Modifying these parameters will improve the accuracy of the simulation and help ensure that the FormulaPi software performs as well in the real-world races as it does in the simulations. The formulapi_ROS_simulator package contains modified versions of the Husky simulation files and serves as the foundation for the development of the FormulaPi simulation environment.

The image below was used to approximate the dimensions of the Yetiborg robot.

The yetiborg.urdf.xacro file defines the yetiborg_robot macro and is loaded from the yetiborg_description package. Note that this file includes the updated dimensions of the Yetiborg in meters. The x and y dimensions are derived from the base of the Yetiborg. The z dimension is based on the size of the wheel. The wheelbase is the distance between the center of the front and rear wheels. The track variable is the distance between the centers of both rear wheels. The wheel_length value is the width of a wheel while the wheel_radius is the radius.

Additionally, the base_link.dae mesh file’s scale is modified to reflect the Yetiborg dimensions.

The husky_wheel macro is used to create and modify the four wheels. This macro is defined in the wheel.urdf.xacro file in the yetiborg_description package. Here, the wheel.dae mesh file is scaled for the Yetiborg.

The husky_decorate macro is also referenced which contains information for visualizing other parts of the Husky base such as the top chassis, bumper, and user rail. These are defined in the decorations.urdf.xacro file in the yetiborg_description package. For the Yetiborg, the top_chassis.dae and top_plate.dae mesh files are scaled while the user rail and bumpers are not enabled.

Lastly, the yetiborg.urdf.xacro file defines the parameters for a simple camera. The Husky robot comes pre-configured with simulation models for a UR5 arm, Kinect camera, and a SICK LMS1xx LIDARs but doesn’t include a simple camera. The camera_macro macro is used to set the parameters and position of a simple camera on the robot. This is meant to simulate the Raspberry Pi camera mounter on the Yetiborg robot. This macro is defined in the camera.urdf.xacro also in the yetiborg_description package.

To test everything, we can visualize the Yetiborg model in an empty Gazebo world. To do this, run the following command.

This will result in a Gazebo output similar to the image below. 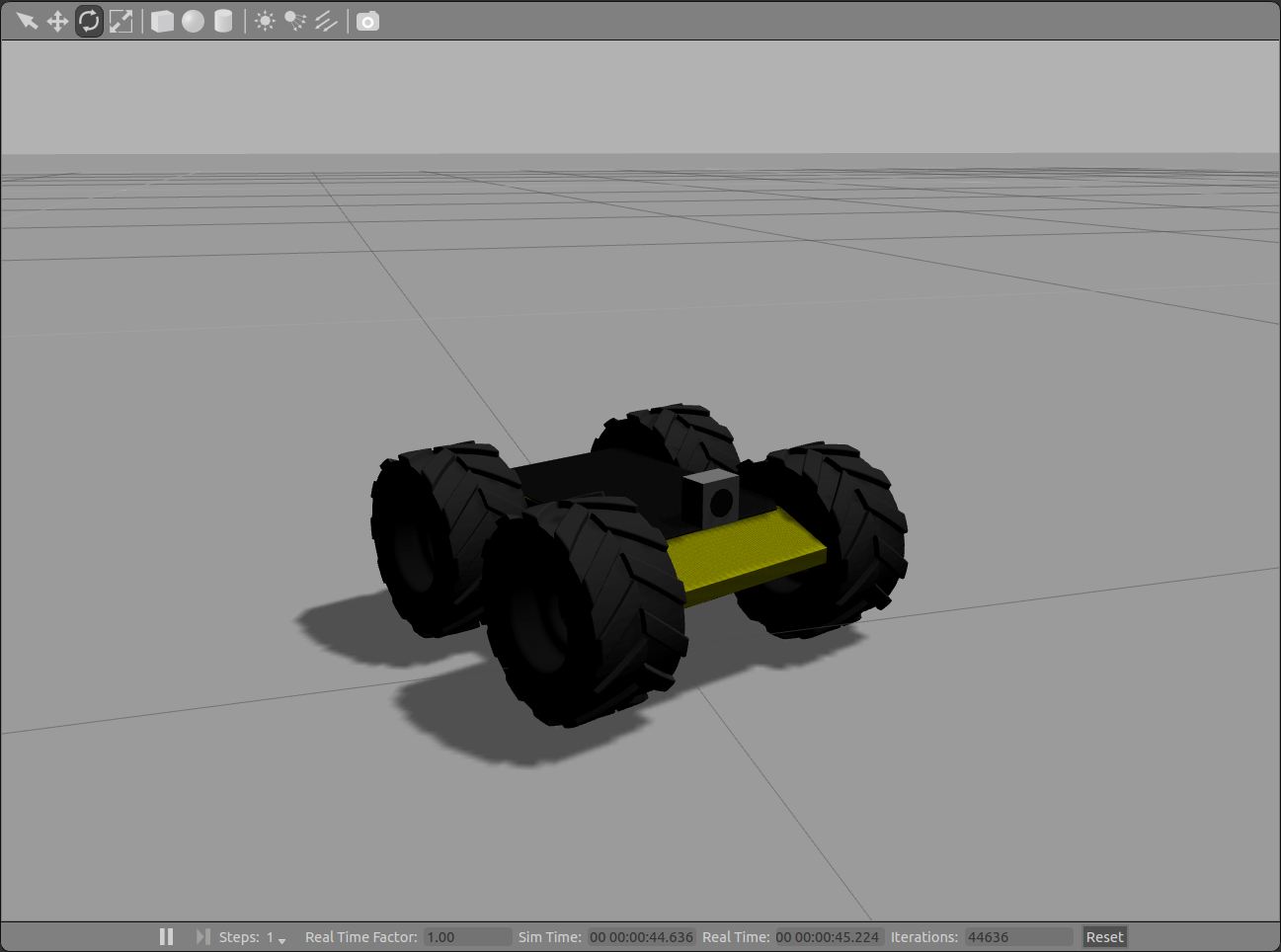 The PiBorg team designed and built the FormulaPi track at their offices. The track is divided up into 6 lanes alternating between red, blue, and green. The colors assist the computer vision algorithms in determining the location of the vehicle on the track. The track consists of 5 turns with a lap length of around 23 meters. The complete dimensions of the track are shown in the image below. 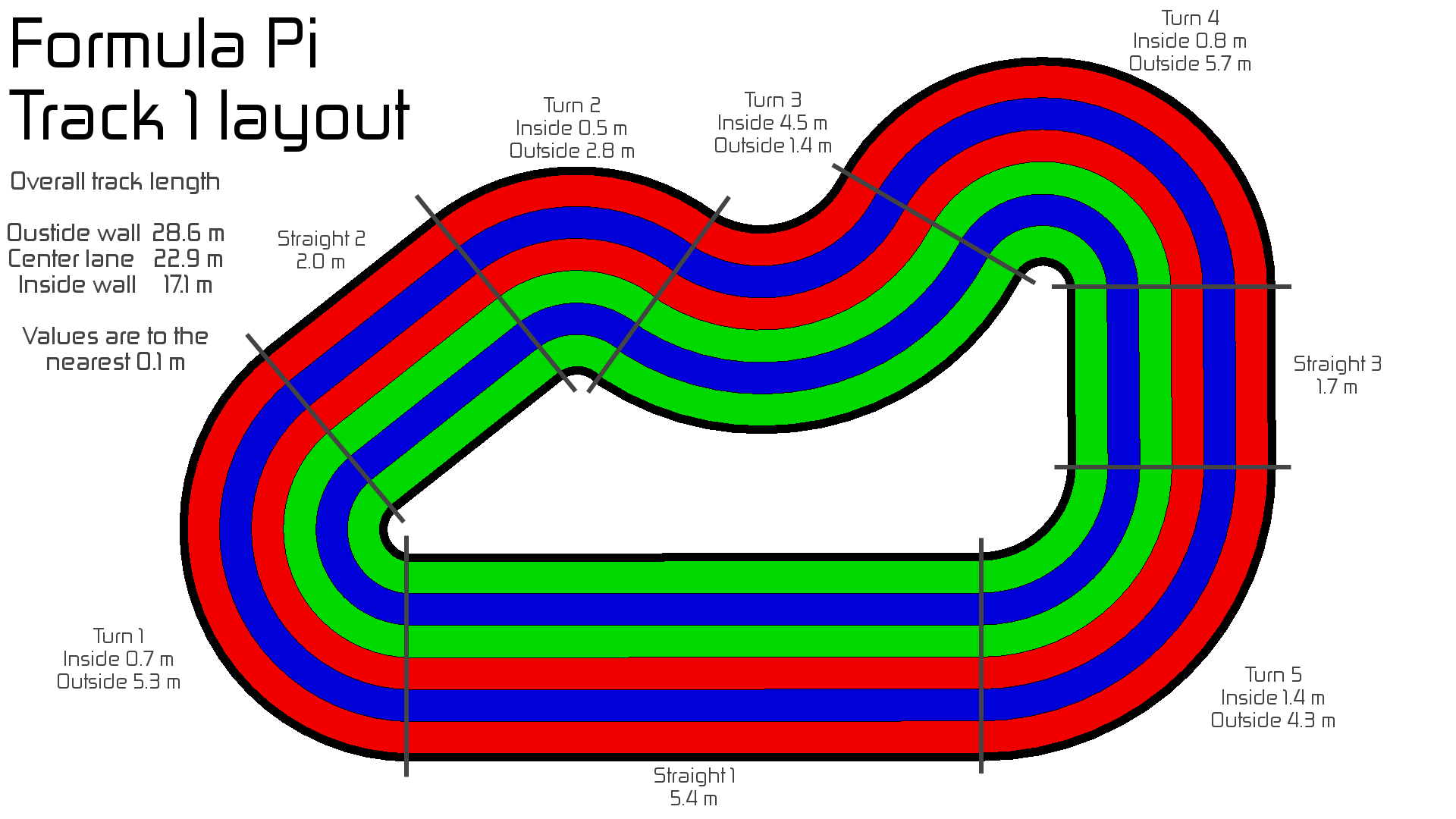 To recreate the track in the Gazebo simulation environment, the track was drawn in Sketchup. They provide several video tutorials to get started with the software. Using the dimensions provided, the track was drawn in Sketchup. The walls were made to be 0.2 meters tall as described on the FormulaPi website. For the lanes, the textures were taken from this image. The resulting model looks like the image below and can be downloaded from the Sketchup Warehouse.

In order to import the track model into Gazebo, it needs to be saved as a .dae file. A copy of formulapi_track_1.dae is available. Next, a world file is developed. The ground plane was removed since it interfered with the track visualization as shown in the resulting fformulapi_track1.world file.

To test the model, the track can be visualized in Gazebo by running the following commands.

The Gazebo simulation of the FormulaPi track model appears below. 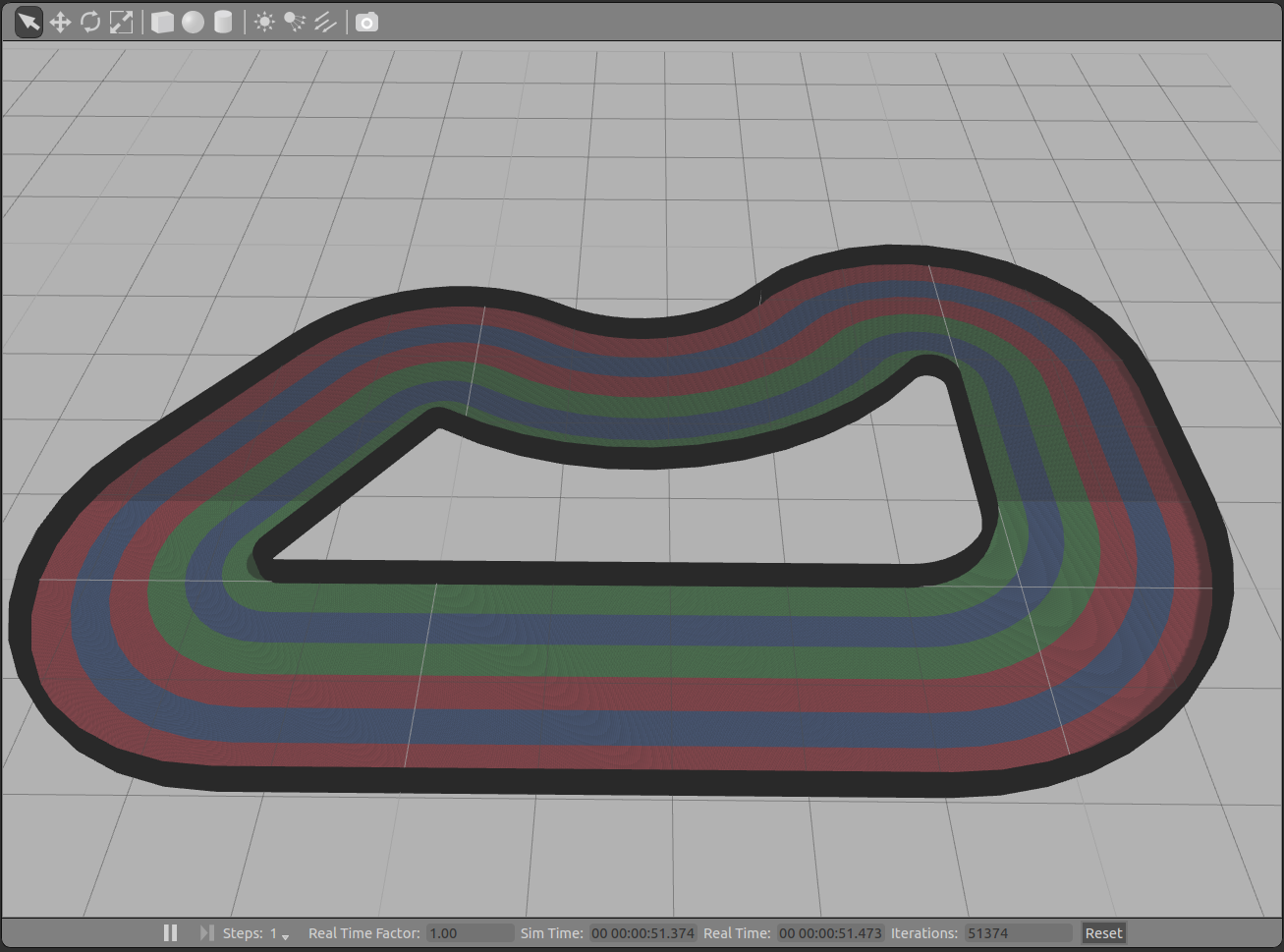 The file formulapi_track1.launch loads the track and spawns the Yetiborg model. It can be launched with the following command

The resulting Gazebo simulation depicts the FormulaPi track with the Yetiborg model simulated on it. 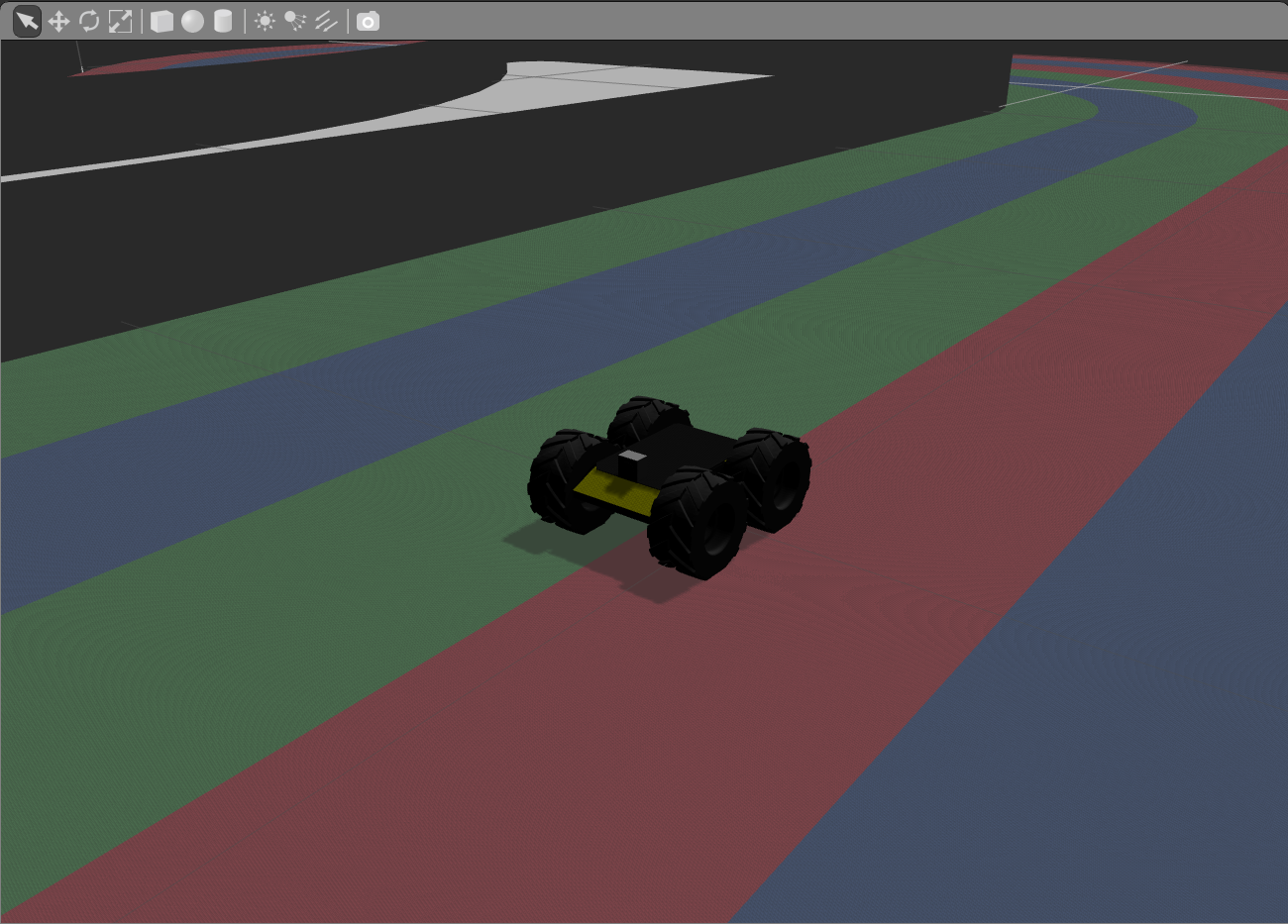 This image, taken from the PiBorg offices, shows the track in real life for comparison purposes. 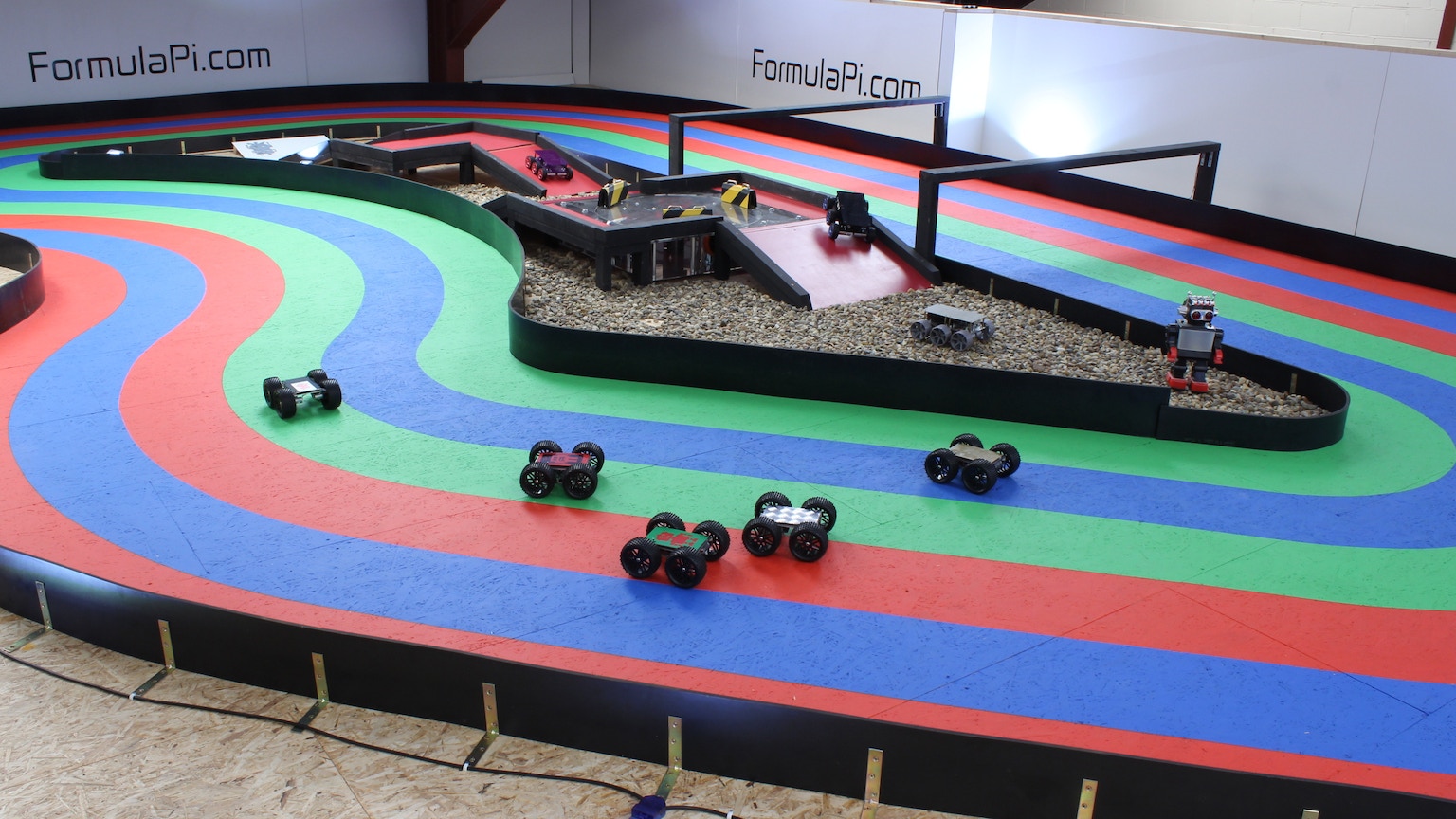 The PiBorg team provides all competitors with a common code base. This software contains the minimum amount of functions needed to process images and control the Yetiborg. The software is only available to competitors and is hosted privately on SourceForge. The intent is to keep the software simple enough for entry-level competitors but to allow flexibility for more advanced competitors to modify the software to improve performance.

The FormulaPi software relies on OpenCV for image processing. OpenCV2 was likely installed with the generic ROS Indigo distribution. Additionally, the cv_bridge package converts between ROS Image messages and OpenCV images. This package, along with the image_geometry package, is installed with the following command:

The file sitl_file.py creates a ROS node which receives the simulated images from the camera, calls the FormulaPi ImageProcessor.py functions to estimate the Yetiborg’s position, and computes a velocity command to send to the Yetiborg to keep it at the desired track position.

The sitl_file.py begins by importing several modules, several of which are of note. The cv_bridge module converts between ROS and OpenCV image types. The geometry_msgs module allows us to use the Twist message which is what is required to send commands to the Yetiborg differential drive controller. Finally, the formulapi_source module contains the provided FormulaPi functions

The file defines the formulapi_sim class. This class defines and initializes several global variables. Of note, it creates an ImageProcessor object to access the FormulaPi ImageProcessor.py functions. It also creates several ROS message subscriptions and publications. One subscriber listens on the “/cam/camera_/image_raw” topic to receive the images from the simulated camera. The post-processed images are published on the “/image_converter/output_video” topic and the desired velocity control commands are sent on the “/platform_control/cmd_vel” topic.

Each time an image is received on the self.image_pub, the data is stored as an Image variable and passed to the cvt_image function. This function converts the image from the ROS Image message format to the OpenCV format and save the image as the self.latestimage global variable. Finally the self.process flag is set which signals that the self.latestimage file is no longer empty.

When the node is initialized, a simple loop is run to receive images and publish control commands. The loop currently starts immediately but could be modified to be triggered by some additional flags. In the FormulaPi code, the Yetiborgs begin moving once they have detected the starting lights turning green, for example.

If an image has already been received, the self.process flag is set to “True.” The latest image is processed using the ProcessingImage function. The Yetiborg’s estimated track position is computed from the image and stored in the trackoffset variable. This is passed to the AdjustMotorSpeed function defined in the formulapi_sim class. Lastly, the image is converted back into the ROS Image message format and published.

The AdjustMotorSpeed function takes the estimated Yetiborg tack position and computes a desired velocity command. Currently the forward velocity, cmdvel.linear.x, is set at 0.2 m/s. This could be modified using a more advanced control system relying on additional input variables. To determine which direction to head to maintain the correct course, the cmdvel.angular.z variable is computed using a simple PI controller. The error is computed between the current estimated Yetiborg trackposition, pos, and the desired position, self.targetlane. The resulting desired velocity command is then published to the Yetiborg controller which determines individual motor speeds.

This complete simulation can be run with the linefollow_cam_formulapi_track1.launch launch file. This file loads the formulapi_track1.world Gazebo world file and spawns the Yetiborg model. It then runs the robot_state_publisher node and launches the control.launch file which runs the low-level Yetiborg controller as well as the teleop.launch file which enables user control input from a joystick. Finally, the SITL node is launched from the sitl_file.py file and an image_view node is initialized to view the post-processed image stream.

The simulation is run using the following command.

Once the simulation is run, the Yetiborg will move forward, maintaining the desired track position around the track while the computer vision output is displayed. An example screenshot is shown below.

Additionally, a video summarizing this development was created and is displayed below.