A perfect estimate of the quadrotor’s pose needed to map creation is typically not available, especially in indoor environments. Simultaneous Localization and Mapping is the process of both making and updating a map of the environment while also estimating the system’s location in that map. This map can be saved and used later for localization and navigation without the need to rebuild the map. Typically, lasers are used to create two dimensional maps based on range measurements. However, these are often too large in size and mass or power intensive for use on small quadrotors. Instead, a RGBD sensor is used as the primary means of measuring the environment. This sensor, a Microsoft Kinect, contains stereo cameras as well as a depth sensor. The Kinect outputs point clouds which can be used by the SLAM algorithms to build the map of the environment. It is also possible to use these point clouds to emulate a 2D laser scan output.

In an ideal world, the map accurately reflects the environment, the environment is stable, and the localized estimate of the quadrotor’s pose in that map is accurate. However, in the real world, the environment is dynamic and sensor measurements are noisy. Therefore, obstacle avoidance and detection systems are developed as methods of continually updating the map. The ROS Navigation Stack combines all of these requirements into a complete sense-plan-act system.

The ROS Navigation Stack is a 2D navigation stack that takes in information from odometry, sensor streams, and a goal pose and outputs safe velocity commands that are sent to a mobile base. The Navigation Stack will rely on the map_server package for the 2D map, the amcl package for localization in that map, sensor and odometry messages from the quadrotor, and the move_base packages to fuse all the messages in order to output a desired velocity command. This integration can be visualized below.

The Navigation Stack needs to be configured for the shape and dynamics of a robot to perform at a high level and there are several pre-requisites for navigation stack use. 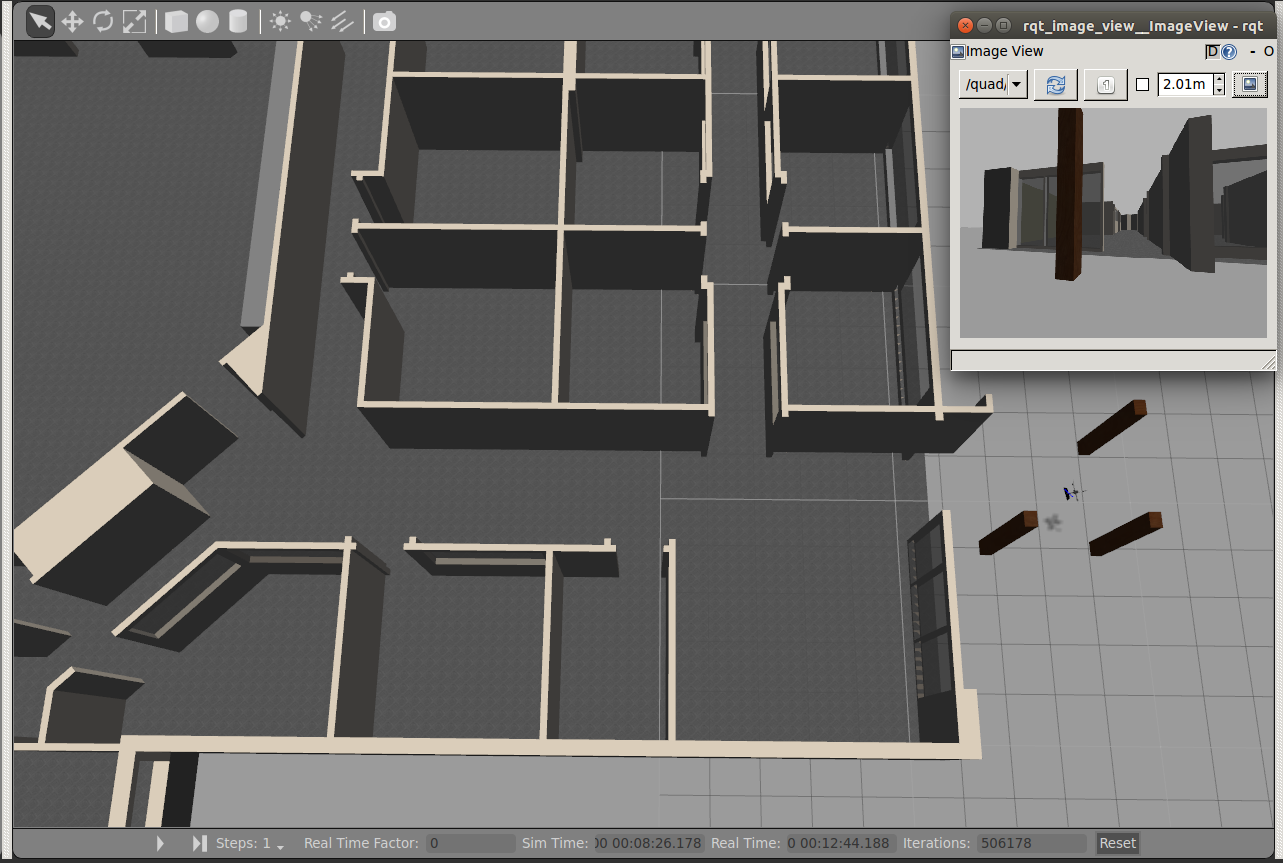 In order to make an initial map of the environment, a series of waypoints was recorded. These waypoints maneuvered the quadrotor from its initial position outside the office complex, in and around several rooms, and returning back to the initial position. This resulted in a repeatable path with enough sensor coverage to support the development of the environment map.

In order to create the occupancy grid map to be used for future path planning, the Kinect sensor output was modified to appear like a laser scan output. The Kinect sensor provides depth information in a 3-dimensional point cloud. However, for 2D mapping, all that is necessary is a series of depth images at a single altitude. This reduces computation costs and makes navigating basic environments much simpler. In order to do this, the depthimage_to_laserscan package was used. This packages reduces computation even further by using the disparity image instead of the complete point cloud. The node takes the Kinect sensor’s disparity image input and needs to Kinect’s coordinate frame to correctly output the laser scan data. This node outputs a LaserScan message that can be used to build the 2D occupancy grid map.

To launch this package in the WillowGarag world with the appropriate control nodes, the quad_slam_laser_map.launch file was used. The depthimage_to_laserscan node portion of the launch file is reproduced below. This depicts several of the variables that were set for this implementation of the depthimage_to_laserscan node. Specifically, the coordinate frame of the sensor is set as well as the input point cloud topic name and desired output laserscan topic name.

The image below depicts a sample laser scan measurement overlaid on top of the point cloud that it was sampled from. 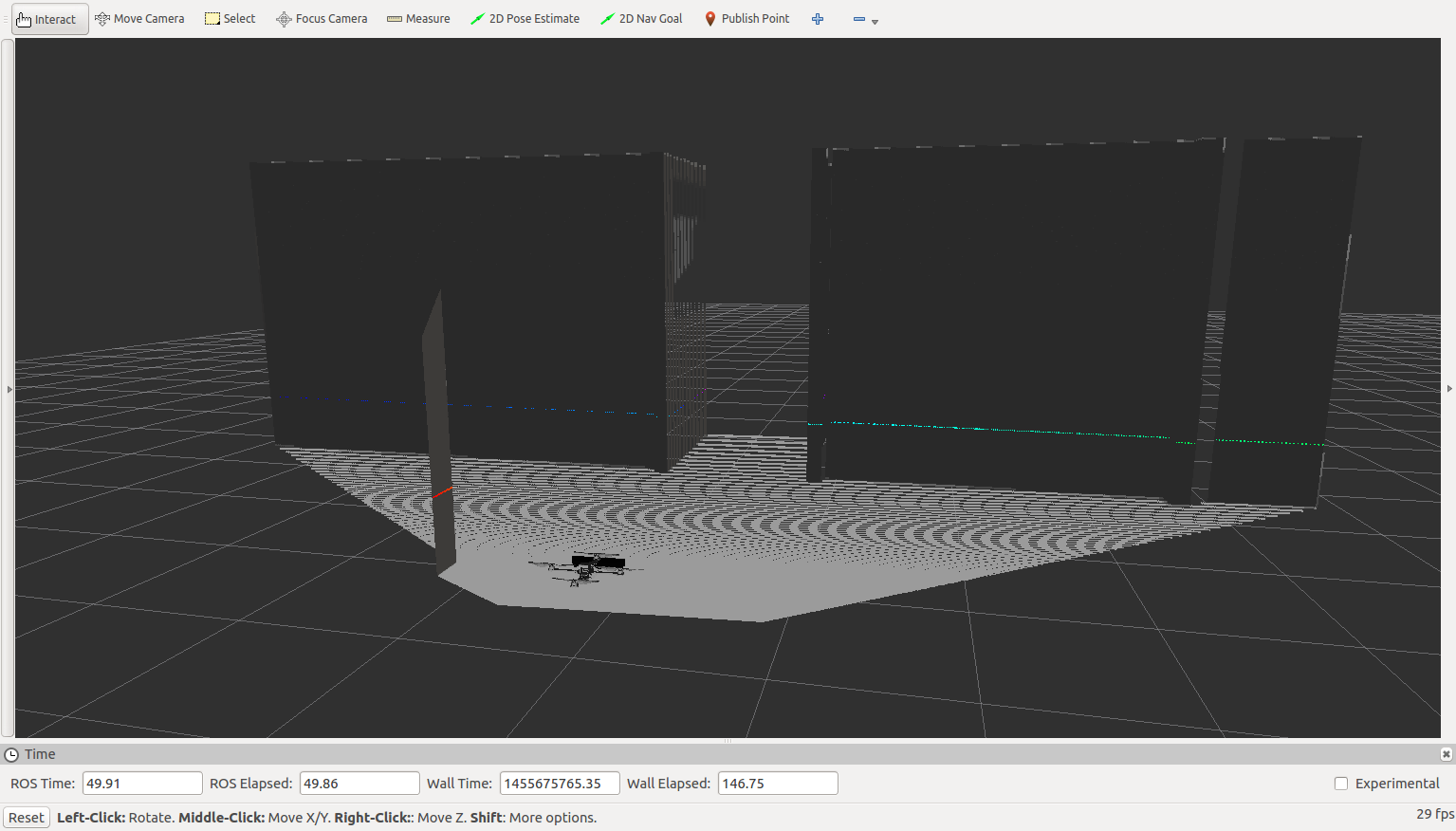 Next, OpenSlam’s Gmapping algorithm was used to create the 2D map. The gmapping package contains a ROS wrapper for the Gmapping algorithm that provides laser-based SLAM. The node subscribes to the laser scan message and outputs a map in the form of a OccupancyGrid message. The gmapping node portion of the launch file is reproduced below. Note that we remapped the laserscan input to the output of the depthimage_to_laserscan node. The odometry frame value is also explicitly set.

Once the environment has been sufficiently mapped, the map can be saved for later use. Specifically, the map can be used to support localization and future path planning algorithms. The map_server node is used to save dynamically generated maps to a pair of files. A YAML file describes the map meta-data, and names the image file. The image file encodes the occupancy data. The map is saved using the map_saver utility using the example code below.

The final map of the WillowGarage environment is depicted below. 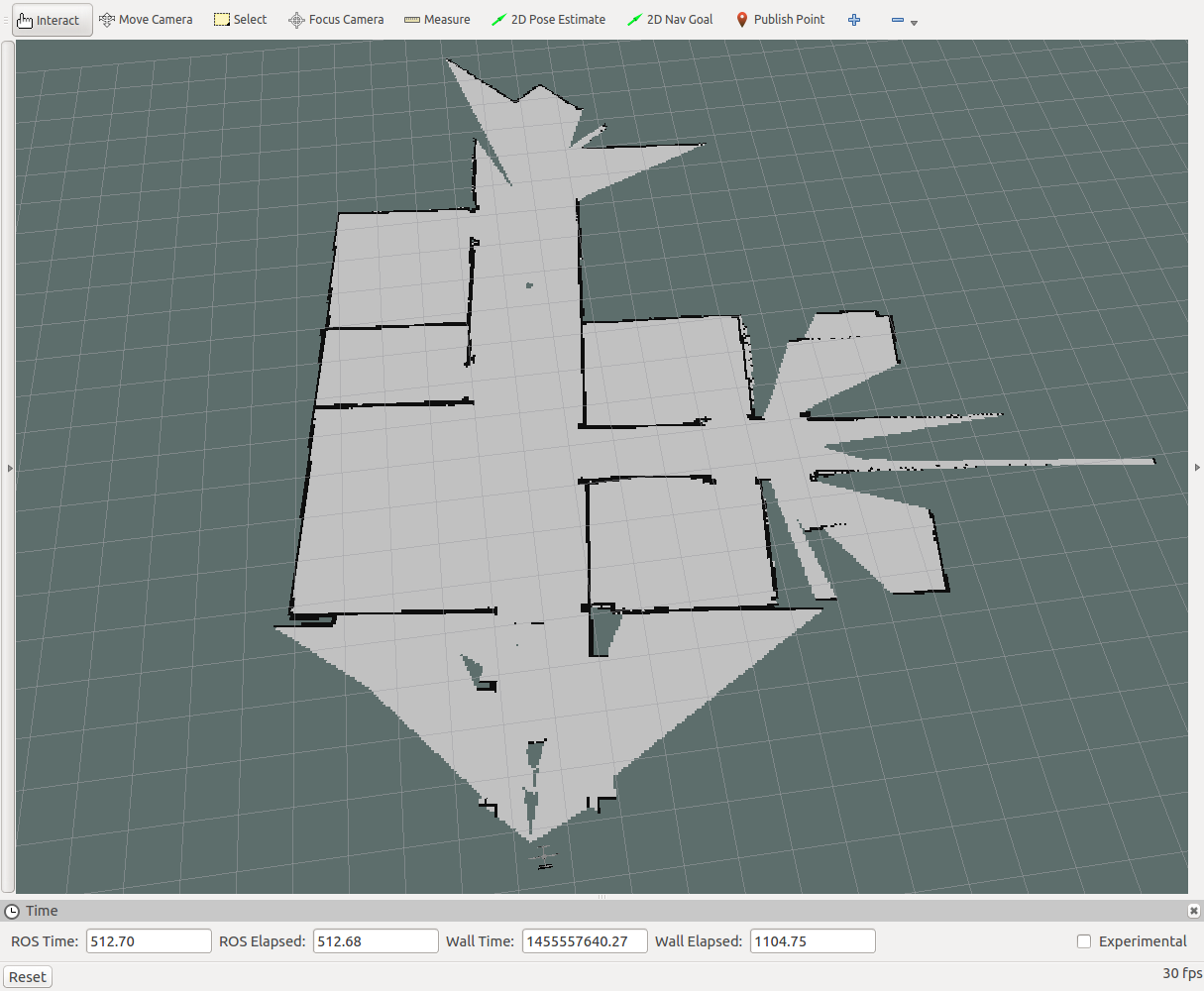 In order to localize in the environment, a previously recorded map is loaded with the map_server node. This node reads a map from disk and offers it via a ROS service. The current implementation of the map_server converts color values in the map image data into ternary occupancy values: free (0), occupied (100), and unknown (-1). The map is available on the map topic as a OccupancyGrid message. This node is initialized with the following excerpt from the quad_2dnav.launch file and loads the map file previously generated for the WillowGarage environment.

The amcl (adaptive Monte Carlo localization) package is a probabilistic localization system for a robot moving in 2D. This approach uses a particle filter to track the pose of a robot against a known map. As currently implemented, this node works only with laser scans and laser maps. The amcl node takes in a laser-based map, laser scans, and transform messages, and outputs pose estimates. The amcl node has many configuration options that can affect the performance of localization. A description of these parameters can be viewed here. These parameters are set in the amcl_quad.launch file. Portions of that file are reproduced below. Specifically, the input laserscan topic name is set as well as the coordinate frames for the quadrotor, world, and frame.

When the node is created, it initializes its particle filter according to the parameters provided. If no parameters are set, the initial filter state will be a moderately sized particle cloud centered around the origin. It is possible to set the initial position in RVIZ using the 2D Pose Estimate button. Alternatively, the initial x, y, and yaw can be set in the launch file. The particle cloud can be viewed as a Pose Array in RVIZ. The particle cloud (a series of red arrows) will converge around the current localized posed of the quadrotor. As the quadrotor maneuvers in the environment, the amcl node will use the laser scan data and the odometry data to continually update the particle cloud with the predicted location of the quadrotor. An example of the amcl point cloud visualization is depicted below.

The excerpt below is from the quad_2dnav.launch file. Here, the odometry topic name is modified to fit the simulation environment and the planning configuration files are loaded.

The navigation stack stores information about obstacles in the world in two costmaps. The global costmap is used for long term planning over the entire environment whereas the local costmap is used for short term planning and obstacle avoidance. One configuration file contains options common to both costmaps while other configuration files contain options specific to the global or local costmap.

RVIZ is a good tool for visualizing all the possible data processed by the navigation stack. It was previously described how RVIZ can be used to set the initial robot pose for the amcl node as well as visualize the point cloud pose estimate generated by the amcl node. Additionally, the navigation goal can be set using RVIZ. This results in a local and global plan that can be visualized. Additionally, both the local and global costmaps can be visualized to depict obstacles identified in the environment.

A video summarizing this section as well as displaying ROS and Gazebo footage is available below.